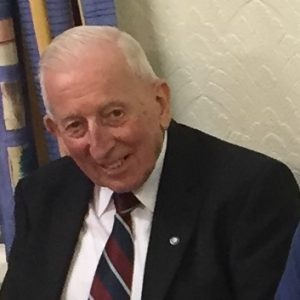 George’s first introduction to the choir was in 1957 when he read of the choir’s success at the Blackpool Music Festival; at that time the Musical Director was Mr. Albert Walton. George had been a regular attendee at the Watchorn Church, from the age of four, and grew up along with Mr Walton’s daughter Janet, her elder brother George and two sisters. One of the earliest memories, and one which sparked his interest in music, was at a concert in the Watchorn basement where Wilfred Clarke, along with Anne Judson, sang ‘Take Care, Take Care’ . Wilf had a wonderful voice and it had such a profound effect on George that it remains a vivid memory to this day. Wilf’s son Jeff subsequently joined AMVC and has remained a loyal, conscientious and talented member for many years.
George became a regular supporter at choir appearances for, despite his love of the music, he was, sadly, unable to sing himself. The choir took it’s present form in 1971 with the amalgamation with Pye Hill Choir (see HISTORY) and the President at the time was Higham butcher Mr. Walter Burrows. In 1987, Mr Burrows, sadly, passed away and George Curley was invited to take the position. George has continued to consider this an honour and a privilege for the last 31 years and the choir has been delighted that he has continued to support us through all these years.
Memories of those years are many and varied. Annual festivals with Alfreton Ladies Choir and Rhodian Brass, concerts with Breaston Ladies, Vernon Midgley  and Riddings Band; two visits to Cardiff Arms Park to appear with 10,000 voices, one with Tom Jones and one with Shirley Bassey; several concerts at Tibshelf Church , Sutton in Ashfield, four concerts with Blackpool star organist Phil Kelsall and over 50 appearances  at Willersley Castle. Somewhere along the way there was a meeting with Polperro Male Voice Choir.
George felt honoured and  privileged to accompany the choir to The Royal Albert Hall for the Festival of Brass and Voices in 2015, and looks forward to a similar privilege in 2018.
During his Presidency, George has seen the choir perform under several Musical Directors; Frank Smith, John Wheatley, Lewis Spencer, Kathryn Haslam and Alan Randle.
George has appreciated the last 10 years progress under the leadership of Terry Clay, supported by Lisa and Michael on piano, and wishes to express his thanks for the honour and privilege of continuing as President, and thanks for the friendship shown to himself and his wife Sue. 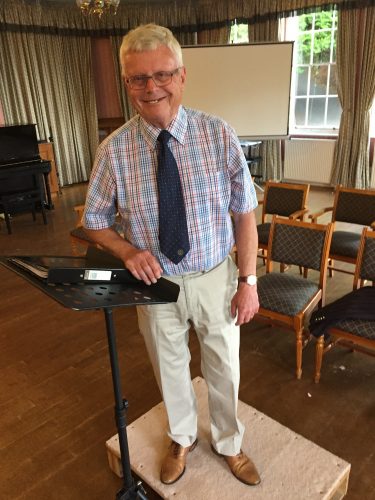 Terry, hails from Heanor. He studied at the local grammar school and then went on to study  piano & viola at the Royal  Manchester College of Music, graduating in 1962. A renowned musician, Terry played E flat bass with Newhall Brass Band and Cornet with The Rolls Royce Band for a number of years. He also plays the organ.
After graduating, Terry spent 6 years teaching music at Tupton Hall Grammar School before moving to Hertfordshire in 1970 to take up a teaching post.
Shortly thereafter he was approached by The Stevenage Male Voice Choir to become a Chorus Master. There then followed a period as Accompanist, culminating in Terry becoming their Musical Director, a post he held for over 10 years.
During Terry’s tenure the choir had great success in choral competitions and made a number of radio and television appearances.
Since returning to Derbyshire, Terry has shared his musical expertise with a number of local male voice choirs, conducting for 8 years the Bestwood Male Voice Choir, a short period with the Chesterfield Male Voice Choir, 14 years with the Melbourne Male Voice Choir and the Nottinghamshire Police Male Voice Choir.
For the past 10 years Terry has had the privilege of working with the Alfreton Male Voice Choir and the combination of Terry’s vast experience and expertise and the choir members commitment to continually expand and improve their interpretation and phrasing of their extensive repertoire has seen their popularity grow.
For over 30 years Terry was a Commissioned Officer with the Territorial Army Reserves and he was awarded the Territorial Decoration. Terry is an extremely active Rotarian.

Lisa Smith grew up in Chesterfield, the third of four daughters all of whom were musical. She began her musical education aged 8 learning violin and electronic organ before also taking up the oboe and progressing on to church organ, taking lessons with Robert Girdler at Wingerworth Church.
Having achieved a thorough grounding in all these instruments she went to study oboe at Huddersfield University under Valerie Taylor. Whilst at university she also took organ lessons from Keith Jarvis and held the position of organ scholar ar Huddersfield Parish Church.
Upon graduating from university she returned to Chesterfield and began to forge a career in music, holding the position of organist firstly at Alfreton Parish church, then at Rotherham Minster. She also played the oboe in local bands and orchestras.
During this time Lisa also studied for a maths degree with the Open University gaining first class honours before proceeding to postgraduate study also with the Open University.
Following the arrival of her family she returned to playing the organ at local churches and currently plays regularly for several churches in the Alfreton and Chesterfield areas. Lisa also plays the oboe in Chesterfield Symphony Orchestra and for local drama productions.
Lisa began accompanying Alfreton Male Voice Choir in 2003 and is delighted to continue to enjoy the challenges 14 years later. 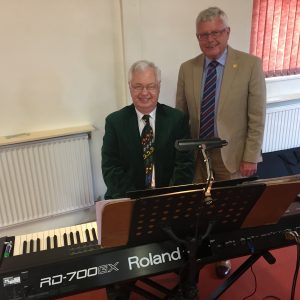 Michael had an early introduction to the organ as his father was a church organist for 36 years. This interest led to Michael taking up various musical appointments in the Nottingham area.  He was Organist at Park  Hill Congregational Church, Derby Road and a Chorister at Castle Gate Congregational Church; he also served as Organist and Choirmaster at Mansfield Road Baptist Church.

From 1985 – 2000 he was Musical Director at Heanor Methodist Church.
Michael was elected President of the Nottingham and District Society of Organists for 1991 – 1992, and also for 2014 – 2015.
For many years he was a cellist with the former Nottingham Harmonic Society Orchestra and the Nottingham Symphony Orchestra.
He was a founder member of the baroque chamber group Corelli Consort, which gave many concerts in the Nottingham area during the 1980s and early 1990s, including accompanying Vivaldi’s “Gloria” and Handel’s “Messiah”.
Michael has also served as Accompanist to the Carlton Male Voice Choir.
Following this he was Accompanist and, latterly, Musical Director of the Nottinghamshire Constabulary Male Voice Choir, culminating, in 1992, with a massed concert of 200 police voices in the Albert Hall, with Nottingham’s Leslie Crowther as Compere.
He is currently lead organist at St. Mary’s and All Souls’ Church, Bulwell, Nottingham.
Michael has served as Assistant Accompanist for the Alfreton Male Voice Choir since 2011.

There are no upcoming events.

I wish to draw attention to the History page. On receipt of a picture from 1957 on Face book, the response from people with knowledge of, and relationship to, members of the …

Friday 30th October at 12am  Swanwick  Crematorium. Dick’s funeral will be streamed to enable us to be a part of his memorial service; details of how to join will follow. October 13th. …

We were very sad to learn of the death of our old friend Ron Padley who passed away peacefully during his sleep on Monday 20th April. He was a wonderful friend  to …

This area is for our choir members only: